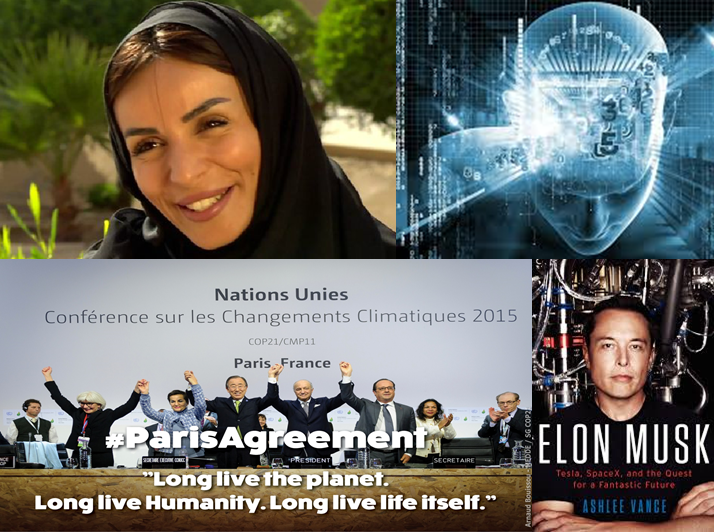 There were three unprecedented events globally last week that captured my attention, for more than just a few seconds. [A] Elon Musk’s announcement of his new $1 Billion not-for-profit to benefit humanity [B] a meaningful and unprecedented Global Climate agreement which was reached in Paris with support from almost 200 developed and developing nations, and [C] the first ever elections in Saudi Arabia where women were allowed to vote and stand for elected office (Municipal level).

2015 has been filled with some less than ideal memories to carry forward with us, into the second half of the second decade of this second Millennium (AD). However, it is important to remind ourselves of some successes this year and derive inspiration wherever possible as we look ahead. I found these 3 events from last week inspiring hope, and wanted to share this with you as I invite you to add (as comments here or related articles) to this any other examples of success and/or inspiration, however small, that you feel should be noted, remembered and built upon!

Saudi Arabia is the only nation in the world where women are not allowed to drive and they also need a man’s approval to get married, obtain a passport, travel abroad or to have access to higher education. This also happens to be only the 3rd time (previously in 2005 and 2011) in over 50 years where even men were allowed to vote in any election (all at municipal level). It is the ‘Kingdom’ of Saudi Arabia after all; and while none of this should be too surprising, it is a tiny victory to celebrate for women in that nation and also worldwide. As per the writing of this at least 4 women were elected into office and unofficially up to 17 (possibly more) are likely to be elected into municipal councils across the country for the very first time.

The Global Climate Conference (COP21) in Paris over the past two weeks, may be regarded as the most successful Climate Conference to date, with almost 200 nations agreeing to a legally binding climate agreement to cap our planet’s average temperature rise to 1.5 degrees centigrade, by significantly curbing Greenhouse Gas emissions from their national economic activities. $100 Billion have also been pledged from industrialized nations (mostly responsible for the rapidly changing and undesirable climactic and localized weather patterns) to the most vulnerable nations, from the negative effects of climate change they are experiencing today and into the future. Canada has pledged $2.65 Billion to this $100 Billion pot, which is expected to be the floor for what may be needed to support those who are disproportionately affected. This is clearly only the first step, but a collosal step nevertheless, and the real challenge of implementing intentions into real, meaningful and impactful actions lies ahead us all!

​OPEN AI – Technology driven not by profits, but a quest to benefit humanity

Elon Musk (CEO, Tesla & SpaceX), Peter Thiel​ and LinkedIn Co-founder Reid Hoffman among other notable members of the global high-tech community, announced a new non-profit – OpenAI – with the interest of building systems based on ‘deep learning’, a form of Artificial Intelligence with a lot of promise to enhance our ability to recognize images, spoken words, language translation, and understanding human speech. According to OpenAI their goal is to “advance digital intelligence in a way that is most likely to benefit humanity as a whole, unconstrained by a need to generate financial return”. The global leaders in this area of Artificial Intelligence are Google, Facebook and Microsoft.

Elon Musk has managed to snap up one of Google’s top research scientists, Ilya Stutskever to be OpenAI’s ‘Director of Research’. Elon Musk himself will co-chair OpenAI along with Venture Capitalist Sam Altman. Other supporters and contributors are Amazon.com, Indian tech giant Infosys and its CTO Greg Brockman.