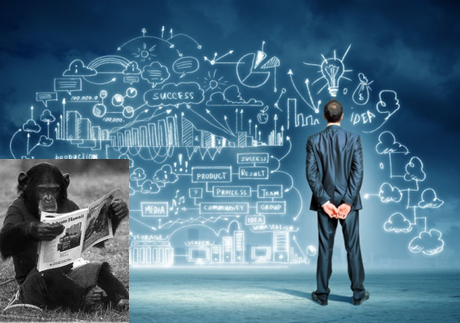 “Most top predators of the planet are majestic creatures. Millions of years of dominion have filled them with self-confidence. Homo-Sapiens by contrast is more like a banana republic dictator. Having so recently been one of the underdogs of the savannah, we are full of fears and anxieties over our position, which makes us doubly cruel and dangerous. Many historical calamities from deadly wars to ecological catastrophes, have resulted from this over hasty jump [to the top of the food chain in about 100K years, relative to several million years for previously dominant species].

Not long afterwards [after discovering fire around 300-800K years ago], humans may even have started deliberately to torch their neighbourhoods. A carefully managed fire could turn impassable barren thickets into prime grassland teeming with game. In addition, once the fire died down, Stone Age entrepreneurs could walk through the smoking remains and harvest charcoaled animals, nuts and tubers. But the best thing fire did was cook….Fire not only changed food’s chemistry, it changed its biology as well…Whereas chimpanzees spend five hours a day chewing raw food, a single hour suffices for people eating cooked food.”

The above is an excerpt from one of the books on my Summer reading list, Sapiens by Yuval Noah Harari, which I had included in my previous article [Summer Reading for the Active or Relaxing Mind!]. I found this genesis of entrepreneurship (however true) rather interesting, and felt compelled to share. While the entrepreneurship of this early human that predated homo-sapiens was critical to our very existence today, thankfully today’s entrepreneurs can create, innovate and make possible new futures (hopefully desirable ones for most) without the use of such destructive powers. In this age of flourishing entrepreneurship in virtually all corners of the globe, as we endeavour to go where no human has gone before, it is worth noting the origins of entrepreneurship and to stay grounded with our own personal ambitions and goals, while also thinking of our immediate communities, our global society and humanity as a whole as we push ahead.